According to the New Jersey Department of Health’s Covid Vaccination Plan, after Group 1A receives their vaccinations, the state would allow 1B frontline workers, which includes:

Recently, Governor Murphy delayed most 1B recipients (excluding first responders) from signing up and receiving their Covid Vaccine (when available) because instead of following his own plan, he allowed people listed in the 1C category to “cut the line” and the 1C category is now given priority over the frontline workers in Group 1 B. The Governor has stated that they are following CDC guidelines, but even the “The CDC’s (own) Advisory Committee on Immunization Practices advises smokers to be vaccinated in phase 1c“.  While we have no issue with allowing 1C groups access, we do take issue with the DELAY of Front Line Workers in Group 1B from getting access to the Covid Vaccination immediately.  Just like the Governor allowed 1C, we are asking that ALL 1B groups be allowed to receive the Covid Vaccine immediately…just as his OWN plan states.

SEND the Email to Governor Murphy asking him to open Covid vaccine eligibility to Educators and Frontline workers, just like his own plan states!

Did you see BCEA President Sue McBride was interviewed for an article on this issue for the Star Ledger?

Did you see BCEA President Sue McBride quoted in a CNN article on this issue? 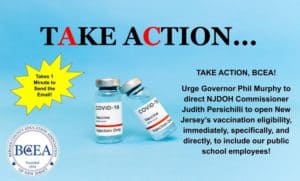 Have a Great Project Idea and Need Funding? Check Out These NJEA Grants:

BCEA: Always Advocating For Our Members